Doshisha University Kendo Club was founded over 100 years ago and has in the past produced 4 individual winners of the All-Japan University Kendo Championships. At Doshisha, we value ‘Internationalism’ as one of our founding spirit, and we currently have a regular exchange program with Tamkang University in Taiwan as well as with many other visitors from abroad. In the past we have had many international students who have joined and graduated from the club. If you are practising kendo abroad and considering a study abroad period in Japan, we would be delighted to welcome you to Doshisha. Similarly, even if you are only visiting Japan for a short time, you will be welcome to join our practices. Please let us know at least 1 month in advance if you are planning to visit us, as there are some periods in the year in which we may not be able to host you (e.g. during exam periods). Please contact us by email if you have any questions, or need any advice about accommodation. We very much look forward to meeting you! 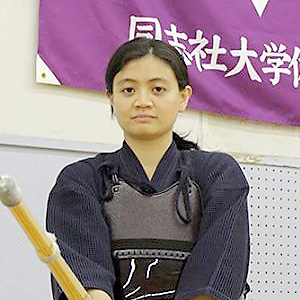 Part of my motivation to further my studies in Japan was the opportunity to experience kendo at its birthplace and was very fortunate to be introduced to Doshisha’s Kendo Club by an alumnus. Little did I know at that point in time, that the next couple of years would prove to be the most challenging, yet enjoyable experience in my short kendo career. Of course, language was certainly a barrier at first, but with almost daily practice, conversations soon flowed with fluidity. When I started at the club, both genders practiced together. Needless to say, the youthfulness of the members showed through the intensity of the training which I could barely keep up with, and took me a while to get used to the fast pace and training menu. However, as the majority of the players were between 1st to 4th dan, everybody had a certain amount of kendo experience and hence were able to work together smoothly. What struck me the most was how everyone supported each other during practice, with shouts of “faito” and a fist bump, especially during particularly intense training. It certainly helped bring the spirit up! One of the most unforgettable experiences was my first gasshuku (training camp) which lasted for a week with training 3 times a day. It was also my first time doing ashiren (leg exercises) and boy did that hurt! The chilly weather did not help either, and almost all members walked like ducks the entire camp. Although it was both physically and mentally demanding, I certainly valued that once in a lifetime experience. Towards the end of my stay, the club training split among the genders as the women’s and men’s teams had different goals to work towards. There were less than 15 girls when I left, hence why the women’s team was such a close knit family. All the members were open towards constructive criticisms regardless of seniority and meetings were held regularly to discuss strengths and weaknesses as well as strategies, especially geared for competitions. Although only 5-7 members were part of the core competitive team, what I especially liked about the women’s team was the emphasis placed on each members’ kendo development, regardless of whether they were a core team member or not. Although I was roughly 8 to 10 years older than the other members (as a graduate student), I was also given chances to participate in friendly matches held regularly with other university kendo clubs. This helped me greatly in my preparation for the 16th World Championships held in Tokyo. The encouragement flowed through to the competition day as well where the entire women’s team came down to Tokyo to support me during the competition, which touched me greatly. The entire 2 years with the club was certainly an eventful and challenging one which helped me grow both as a person and as a kendo player. I am sure that the same support and love would also be extended to anybody who wishes to experience kendo in Japan and especially so, at Doshisha Kendo Club. 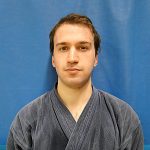 I started to practice Kendo during my time at high school at the age of 16. I was mainly attracted by its esthetic appeal. When I first arrived in Japan a couple of years later I had the grade of shodan and my japanese was very poor. I joined the Doshisha University Kendo Club’s practice by accident due to a misunderstanding caused by my inadequate language skills. I continued anyway and practiced at the Doshisha University Kendo Club during all my consecutive stays of my student career (Master and PhD). Compared to Kendo practice in Europe, the practice at Doshisha was challenging and at times very tough. Keeping up with the high level of the students was not always easy. Even though the practice is seriously focused on competitions the atmosphere was usually relaxed and the students support and push each other during exhausting practice sessions. Since everyone is practicing as a team it is easier to persevere during tough drills. My Kendo changed and improved a lot during my time at Doshisha thanks to the students and the effort of the alumni, who regularly attend practice during the weekends. I did my examinations for 2nd and 3rd dan during my time in Kyoto, usually accompanied by a couple of Doshisha’s students who were also attempting their next grade. The students and alumni always helped with the inscriptions and could also help out during the day of the examination so I was never in danger of getting lost during the event. Apart from the improvements of my Kendo, being part of the Doshisha University Kendo Club gave me the opportunity to experience japanese student life and university club culture. Due to the frequent training sessions I could and had to speak japanese constantly. I was able to connect with the Japanese students and find friends easily. After a couple of months I was capable of speaking fluent japanese in everyday conversations. Moreover being part of the kendo club taught me a lot about japanese etiquette and social customs which was useful during meetings with university professors. 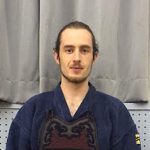 Rain…”why today?” I thought to myself as I wrapped my Bogu in my furoshiki. “Of all days it had to rain, it had to be this one.” I actually don’t mind rain so much, being from England, but today I was off to Doshisha University in Kyoto for my first kendo session with the University club. I had to go by bike and attempt to ride one handed while carrying a rucksack, my Bogu and a Shinai. After a slightly dangerous start I managed to arrive at the University where I was met by Matsuo san. He showed me where to put my bike and then took me to the dojo. As I entered the corridor it was a buzz of activity, I had never seen so many young people in dogi. Everyone was chatting, warming up or just relaxing before a hard training session. The atmosphere was great and everyone was very polite when I said hello. I met Sebastien a French guy that Ogawa Sensei (Head Coach) had introduced me to before. He had been traveling around Japan living in different cities and practicing Kendo. He was already changed but coughing. He had caught a cold and was nervous about the session. Me too, I was nervous, they all looked eager to give some foreigners a beating – Japanese University Kendo club style. Me and Sebastien made our way into the dojo, placed our men, kote and shinai down and was then met by Saki san who spent the entire session taking our photo. We were then met by the captain of the team who would be leading today’s class as sadly Ogawa sensei was stuck in a meeting. As the nerves began to rise, I was starting to wish I was stuck in a meeting. The class began and we started in groups of four. The first person cut men 5 times and then did yokomen (like in kirikaeshi) 50 times. We did this 4 times each. I felt good but after 30 each time my arms would really start to slow down. “Water break”, did I miss understand this….nope we had a water break … YEAH!!! I went straight to the fountain and drank like I had walked in a desert for 4 days with no water. We lined back up and got straight back in with kakarigeiko. This was fun, you choose what target and you do it 3 times each. I am not sure how long, but it wasn’t short, but it was fun. Finally, time for keiko and this time I was in the front and people were lining up to fence me. Bang, “mennnn” bang “mennn”, I don’t think I had even taken a breath and Matsuo San had hit me twice. This was a similar pattern with each person. Their kendo is very quick and smooth. If you want to test your reaction skills I recommend these guys, they will definitely keep you on your toes! After 100 suburi we gave a farewell speech and me and a very happy French man packed up our gear to once again practice our balance skills on our bikes. Overall it was a great experience, I really enjoyed it. The keiko was really good and the exercises were tough but fun, there is a strong team spirit in the dojo and the students are very proud to wear the Doshisha name. They were all very welcoming, a lovely group. Thank you to Ogawa Sensei and his students for a wonderful experience