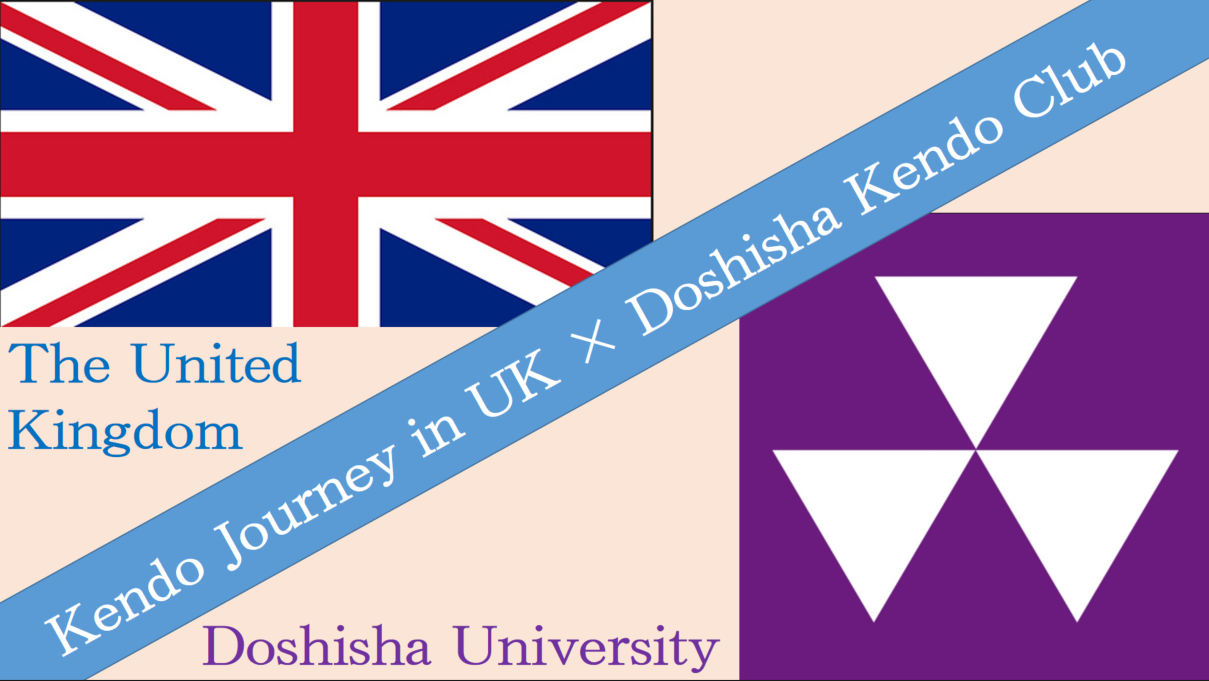 Kendo in UK what I thought

My name is Kaito Kitada. This March, I was graduated Doshisha University Kendo Club. I was chief manager about making this website, and now I’m Law School student.   This report is written about my Kendo journey in UK one month(2/14～3/14). Of course, I had sightseeing a lot, but I’ll report only Kendo in UK this time.

This program is new program that Yuma Ogawa who Doshisha University Kendo club’s coach and Yutaka Zenon who UKKC’s coach try to make. The purpose is making relationship between those University Kendo Club,each students will go and come to Japan and UK, having keiko, and so on.
Me and Kimio Kubo are the first student of this program. We went to UKKC and had keiko.Luckly, we could have more opportunities that had keiko a lot of UK’s Kendo-ka (of course, not only keiko). It was so amazing and exciting time that I have ever had.

Keiko at all over UK

First, we arrived at Edinburgh, and the goal is Canterbury. So, we almost crossed UK.
Kendo don’t have the Olympic like other Budo (like Karate, Jyudo etc), and have less opportunity to broadcast in TV. But Kendo is the one of popular Budo in Europe. Of course, it is same in UK. And there are lot of Kendo-Dojo.
We had keiko at Tora that one of big Kendo-Dojo in London. There is many Kendo-Ka (it mean Kendo player) come from various country (I think over 30 when we had keiko!).And, Essex Kendo-Dojo is the new Dojo in UK, various people (student, adult, so on) have Keiko at Liverpool Kendo-dojo.

Why Kendo-Ka says “CUT” when they “HIT”?

When we had Keiko at Manchester where the First Keiko in UK (it was so memorable because their “Kiai” and passion was super!),I had some problem. The problem was explaining about Kendo technic in English. I can talk a little in English(maybe you already understood when read this article),but explaining about Kendo technic is really hard(Like explaining Kanji but not using Japanese).For exaples, “Ashi-Sabaki”(footwork), “Tenouchi”(using your wrist or snap),”Chushin”(take your opponent center),and so on…These words are “Kendo” Japanese. Some words could easily explain (like the examples), and some words can use as it is. Because Kenso-Ka know what it means.
And this is the interesting point. When we teach in Keiko, sometimes we comment “shout more lauder” in Japanese. Because, it mekes your Ippon more easier in Shiai (it means Kendo fight).But teach this case in English, they use the word “KIAI”. This is one of Japanese, and get the really important point. I was impressed. And another one, when they “HIT” somewhere, they use the word “CUT”. Because SHINI is imitating KATANA. In the past, Japanese Samurai using KATANA to fight, and trained themselves by KEN-JYUTSU. Now, KEN-JYUTSU is mastered, and we call “Kendo”, but the essence is not changed. We using KATANA. Not SHINAI. So they use the word “cut” when they “HIT”.
We were struggling to explain Kendo technic and learned how to explain one month.Yes,we can talk in English smoothly more than first, but that was the time to go back to Japan. Oh dear…

Keiko at some Universities

We could have Keiko with York UNI and Oxford University .These Club are really strong, they won the All UK Universities competition(individual and team match).The Keiko is hard, but it was fun. They showed their University, some nice places, and had great meals! It was fantastic time. I’m looking forward to coming Japan them. Thank you everyone!

In Birmingham, we could attend UK national Kendo team’s training. It was really lucky! Mr.Hiyama who UK national team coach, train and teach the team, from basic Keiko to practice Shiai, it was really hard training. Top class Kendo-Ka came here all over UK. It was high level Keiko and they have great skills, technics. I’m looking forward to watching next world Kendo competition .And if UK’s national team want to practice Shiai or training in Japan, Doshisha University Kendo Club will help your plan.

We did Shimpan(it means judge) at UNI Taikai. In this Shiai, we could meet again our friends in UK,I was really glad and could see their Shiai. They said to me, “why you don’t attend the Shiai?” So, next time, I want to make a team with our University students, and attend free Shiai.

I feel about it. Yes, I know, it was strange expression. But this is the best way to express my thought.
Their passion for Kendo, is really awesome. Absolutely awesome. They want to know a lot of technics, skills, theirs improving points. And they ask about these not only when we had Keiko, but also had meal, and drink in pub (one day we talk about Kendo till 4AM!).
And, they also practice KATA very well. Some Japanese Kendo-Ka couldn’t do KATA correct way, even they are really strong in SHIAI.
These days, we can watch a lot of Kendo Shiai in Youtube. I like to watch it. Also, UK Kendo-Ka like to watch too, and they know many of strong Kendo-Ka, 8-Dan Sensei. They learn about technics, skills on Youtube. They asked me, “How to cut this waza?” “How can I move like this Kendo-Ka?” Their passion and attitude about learning Kendo is great. Some people said to me “If I could start Kendo more younger, I could be more strong.” ”We really want Kendo Sensei for improve ourselves”
And some people do other Budo like Karate, Naginata, Judo. There are people who do Sado and Zen! It was surprised me. Cause I’m a Japanese, but not doing like these Japanese thing.
They really like Kendo. In Japan, We focus on winning Shiai. And almost people stop doing Kendo when graduated University or High School (Of course Doshisha University Kendo Club’s goal is to be the Champion of Japan. And there some difference that the social system like working till late time in Japan). That is why thought they like a “Japanese” more than “Japanese” They have a lot of knowledge about Kendo or another Budo and Japanese culture. I was really impressed these things.
They have a question about “Can we be more stronger ?” I was asked this question many times in UK. I think, it doesn’t matter when you started Kendo and where you were born. In fact there are many Kendo-Ka got 7 or 8 Dan or really strong Kendo-Ka even they started Kendo when they were adult (not young). And I think, all the Kendo-Ka in UK will be strong Kendo-Ka. Because they have a great passion. I promise.
Kendo is spread from Japan to all over the world, but we should learn their passion and attitude about Kendo.

I really appreciate for had Keiko with us, let me stay, talked with me, guided places, and so on. Thank you for all your help. This trip is the best that I have ever experienced in my life.
And I’ll glad to see you in Japan or somewhere. Also I’m looking forward to having Keiko with you!
If you want some Keiko in Kyoto, please let me know. Our Club will make you help.